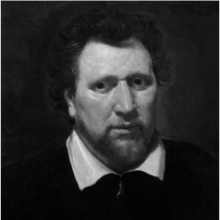 Ben Jonson was born in London, England on June 11, 1572. He went to the Westminster school in 1589 but left shortly after to become a bricklayer, military service member, and an actor. In 1598, Jonson wrote what is considered his first great play, Every Man in His Humor. In a 1616 production, William Shakespeare acted in one of the lead roles. Under King James I, Jonson received royal favor and patronage. Over the next fifteen years many of his most famous satirical plays, including Volpone (1606) and The Alchemist (1610), were produced for the London stage. When he died in 1637 he was regarded as one of the major dramatists and poets of the seventeenth century.

When matched to Ben Jonson, it means that similarities have been found between your poetic style and the themes and literary techniques typically seen in works by this famous poet. For example, you might use alliteration or strong imagery in the same way that Jonson does. Recognizing these similarities is important because it gives you information about the history of your poetic style, which poets might inspire you, and what writing techniques you should try next.

Try using metaphor and personification more often. You might also like experimenting with themes involving death and divinity.