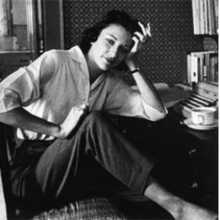 Anne Gray Harvey was born in Newton, Massachusetts, on November 9, 1928. She married at the gae of 19, and a couple years later gave birth to her daughter. She was diagnosed with postpartum depression and admitted into a neuropsychiatric hospital. She had another mental breakdown after the birth of her second daughter and in 1955, on the day of her own birthday, attempted suicide. She was encouraged by her doctor to pursue an interest in writing poetry she had developed in high school, and in the fall of 1957 she enrolled in a poetry workshop at the Boston Center for Adult Education. She went on to write and won the Pulitzer Prize for poetry in 1967 for Live or Die. At the age of 46, despite a successful writing career she lost her battle with mental illness and committed suicide.

When matched to Anne Sexton, it means that similarities have been found between your poetic style and the themes and literary techniques typically seen in works by this famous poet. For example, you might use simile or strong metaphor in the same way that Sexton does. Recognizing these similarities is important because it gives you information about the history of your poetic style, which poets might inspire you, and what writing techniques you should try next.

Try using personification and alliteration more often. You might also like experimenting with expressing intense feelings and themes in your poetry.