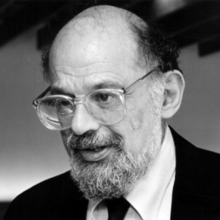 Allen Ginsberg was born in Newark, New Jersey on June 3, 1926. Due to his mother's struggle with mental ilness, Ginsberg developed a lot of tolerance and empathy for madness, neurosis, and psychosis. He was inspired by poets like Walt Whitman and Edgar Allen Poe and once he got into Columbia University, he vowed to devote his life to helping the working class. He and some friends also became the leaders of the emerging Beat movement. In 1956 Howl and Other Poems was published, and "Howl" became one of the most widely read poems of the century, translated into more than 22 languages.In 1979, Ginsberg received a fellowship from the National Endowment for the Arts, and in 1993, he received the Chevalier des Arts et des Lettres (the Order of Arts and Letters) from the French minister of culture. He also cofounded and directed the Jack Kerouac School of Disembodied Poetics at the Naropa Institute in Colorado. He died in New York City in 1997.

When matched to Allen Ginsberg, it means that similarities have been found between your poetic style and the themes and literary techniques typically seen in works by this famous poet. For example, you might use powerful imagery or allusion in the same way that Ginsberg does. Recognizing these similarities is important because it gives you information about the history of your poetic style, which poets might inspire you, and what writing techniques you should try next.

Try using symbolism and personification more often. You might also like experimenting with colloquialism and writing free verse instead of using rhyme scheme.