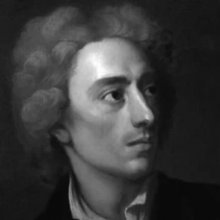 Alexander Pope was born in London, United Kingdom on May 21, 1688. Since he was barred from public school and university due to his religion, Pope self-taught himself French, Italian, Latin, and Greek. He wrote his earliest work, Ode to Solitude, at just the age of 12 when he also developed a bone deformality that he would struggle with the rest of his life. His most well-known pieces that he wrote in his early years include Pastorals, Essay on Criticism, and Dunciad. He was also made famous due to his six-volume translation of Homer‘s Iliad, off which he was able to make a living off of by release one volume each year.

When matched to Alexander Pope, it means that similarities have been found between your poetic style and the themes and literary techniques typically seen in works by this famous poet. For example, you might use irony or metaphor in the same way that Pope does. Recognizing these similarities is important because it gives you information about the history of your poetic style, which poets might inspire you, and what writing techniques you should try next.

Try using antithesis and paradox more often. You might also like experimenting with a dramatic voice and tonal variation.