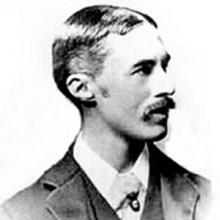 Alfred Edward Housman was born in Fockbury, Worcestershire, England, on March 26, 1859. He attended St. John’s College, Oxford in 1877 but fell in love with his heterosexual roommate Moses Jackson and struggled to pass his final exams. He passed the following year and became a clerk in the Patent Office in London for 10 years. Housman only published two volumes of poetry during his life: A Shropshire Lad in1896 and Last Poems in1922. His popularity was heightened when composers started created musical settings for his work. Despite his poetic successes, Houseman was a relatively private man who remained isloated and out of the public eye throughout his lifetime. He died in 1936 in Cambridge.

When matched to A.E. Housman, it means that similarities have been found between your poetic style and the themes and literary techniques typically seen in works by this famous poet. For example, you might use symbolism or imagery in the same way that A.E. Housman does. Recognizing these similarities is important because it gives you information about the history of your poetic style, which poets might inspire you, and what writing techniques you should try next.

Try using vivid imagery and allegory more often. You might also like experimenting with unclear settings and wriitng love poems in an untraditional way.