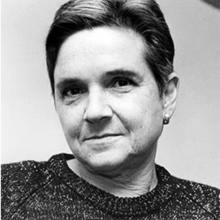 Adrienne Rich was born in Baltimore, Maryland on May 16, 1929. She attended Radcliffe College and published A Change of World, for which she won the Yale Series of Younger Poets prize. She published her second volume of poetry, The Diamond Cutters, in 1955. In 1973, during the feminist and civil rights movements, the Vietnam War, and her own personal distress, Rich wrote Diving into the Wreck, a collection of exploratory and often angry poems, which garnered her the National Book Award in 1974. She refused to accept the Natioanl Medal of the Arts award from Bill Clinton in 1997 because she did not believe the adminstration was compatible with her definition of art. She died in 2012.

When matched to Adrienne Rich, it means that similarities have been found between your poetic style and the themes and literary techniques typically seen in works by this famous poet. For example, you might use powerful imagery or metaphor in the same way that Rich does. Recognizing these similarities is important because it gives you information about the history of your poetic style, which poets might inspire you, and what writing techniques you should try next.

Try using rhyme scheme and symbolism more often. You might also like experimenting with syntax and diction.