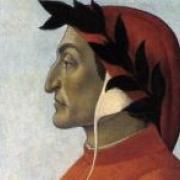 Even as the little vessel shoves from shore,

And when he wholly felt himself afloat,

There where his breast had been he turned his tail,

And with his paws drew to himself the air.

A greater fear I do not think there was

What time abandoned Phaeton the reins,

Whereby the heavens, as still appears, were scorched;

Nor when the wretched Icarus his flanks

Felt stripped of feathers by the melting wax,

His father crying, "An ill way thou takest!"

Than was my own, when I perceived myself

On all sides in the air, and saw extinguished

The sight of everything but of the monster.