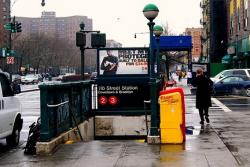 You’ve heard by now, especially if you live in the New York area, that on Wednesday, March 12, 2014 two five-story buildings exploded on 116th and Park Avenue in upper Manhattan. This explosion was caused by a gas leak, and it affected buildings up to several blocks away. A number of people were killed and many more injured, while people who lived in the buildings are now homeless.

It is difficult to sort out emotions about an event such as this especially when there is nobody to blame. That’s why we created this slam- so you can share your thoughts and reactions to this tragic event. Even if you were not personally affected by this event, it is important to show your support for those who are and let them know they are in your thoughts.

Happy
It might seem crazy what I'm 'bout to saySunshine she's here, you can take a break
8 months 1 week ago

Cyan Blue
I never see you anymore. The smell of it filters in. It comforts me, Representing all that might've been.
9 months 2 weeks ago

FIX
FIX Sorry I forgot to note, Attimes i wish I could be nothing more than a quote,
1 year 1 month ago