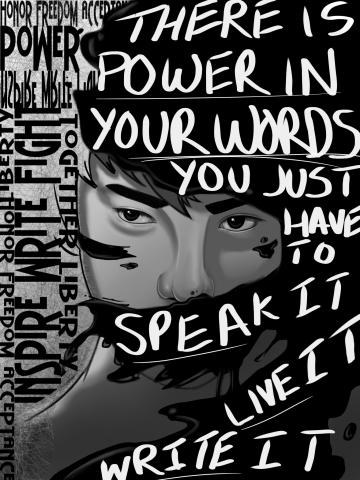 Your given civil liberties such as the right to free speech
They become the tools to fight social iniquity!
For those who are blind to racial discrimination and crime,
I present to you the leaders of 1999.
Their story begins in Long Beach , California
With a classroom infamous for their attitudes and behaviors.
No teacher would help them and other students didn't care,
Because the colors of their skins and fronts they bared.
Adults said they were unteachable unreachable
that they were just a waste of time,
"But adults never cared about us and our struggles in life!"
"Society crushed our dreams, our self esteem , our hope for the future!"
"Why? Because we were everything but what they were!"
Then she came riding in like Jeanne of Arc,
Where all others failed she saved them from the dark.
Taught them power could be in more than mean words and empty violence,
They opened their eyes to see the parallel lines
That ran between their lives and others.
An army of one hundred fifty all led by one,
With swords of lead and shields of paper.
Life became a war game using word play ,
because that's the only way the world pays
Attention to what these soldiers had to say.
At first they were afraid, of people who would respond in hate.
But the more they understood the clearer it had been.
That if they did nothing now, nothing would ever change.
So their tears, laughter and souls were then condensed into 277 pages.
It began as an experiment to improve themselves,
To prove that they were more than the slurs and labels.
But then they inspired people to aspire ,
To fight the silence that ensures history to repeat itself!
Alone they were nothing, just a cluster of misunderstood angst.
Together they became something, a voice of reason, a voice of power!
So defend your rights to freedom! The attention of your rejection towards social discrimination, becomes your weapon in the war with oppression!
To make your own path for your future , everyday will be a graduation.
If by now their identity proves to be a mystery,
they are the warriors of words, activists of racial equality.
Their name pays homage to the civil rights group of the Freedom riders,
These pen wielding, society changing teens
Are none other than the legends called the Freedom writers.
Poetry Slam:
Everything is Awesome Scholarship Slam - CLOSED
This poem is about:
My community
My country
Our world