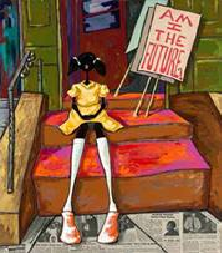 Education is spoiled by the rotting brains

Disseminating by the television cell membranes

Getting rich quick is more motivation

Than the motto of Knowledge is Power

To tweeting and "Please double tap me"

Cities that once thrived on unity

Are now dead and deceasing

Just because "He rep M.O.B"

Churches that were once full

Now the night clubs a re consistently full

Re-written into songs of things at night between you & me

Know what I mean?

I thought a lady had elegance, and elegance

And what about the characteristics of a gentleman?

Thought they did not sag and disrespect woman

So I looked to the generations to come

I asked them what they knew

Some answered some said none

I told them the truth

But its up to them, they had to pick and choose

And the guys could either be successful with a job

Or making license plates all their lives

I even showed and gave them examples

Told they could idolize stupidity

One little girl looked up to me

Because am I really the future?