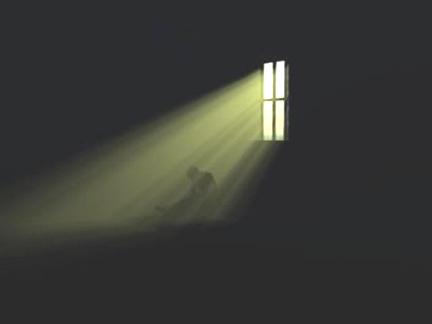 Five Stages of loss colored with the paints of emotion,

stained by the blemish of unexpected commotions.

It gets ugly, "it's on me" you say to survivors who feign joy.

Halted and assaulted by the pain of losing loved ones,

Right off the bat, denial freezes you in your tracks

telling you it's not okay, just fight reality's trap.

Stuck in a loop of illusion and despair, don't know who, what, or why?

You get closed off, zoned out of your regular atmosphere

unable to breathe what used to be the same air. It can't be true, can't be real

you know it's not FAIR. Looking at the outcome from infinite angles

won't give the answers you want, just the ones tearing you apart.

Anger marches in to fan the flame and make a molten mess.

Can't gaze into your mother's eyes without SNAPPING! BREAKING! BLOWING UP!

Each of your retinas is seeing through a broken lens, trying to show your brain its freaking out.

The mind  isn't showing up to the body's action council, thinking its done enough.

Little does it know the flesh is immolating the world around it, making way for more pain,

more loss in the time your not countin'. Your hearts already shattered, so why're you

smashing the pieces helpless? They wouldn't want you to beat yourself around,

nor the people you should be helpin'. Stop pourin' gasoline on your scorching wounds.

Stop! Drop! and Roll! Get your attitude under control bro'.

The bargaining battle is 'bout to start soon, NO RIGHT NOW, RIGHT HERE.

"Take me" is what you say, when sitting at your bedside, mouth dry, red eyes, last try.

You'll do anything just for the miracle of some more precious, priceless time with them.

That's a sweet deal, but not enough to bring 'em back. You're still staying on the attack,

ready to give it all for your settled desire...

like a begotten child. The time you foolishly wasted has taken off, it's long gone, run home.

TICK-TOCK, focus on the family you got in your broken, battered, bitter arms.

No reason, no rhyme that can explain away the wasted hours.

Addicted to your tiny screens, SNAP-CLICK: A bad choice now don't you AGREE?

Too little, too late, don't make that same mistake tomorrow.

Fed up with all your dead ends, failed asks, and lingered wants, Depression drops

in with nothing else to do, but mope. Everything's smeared with blue, the only paint left

on your palette of feelings. Someone asks you a question, you start givin' them metaphors,

serving sarcasm on a silver platter. You've given up, thrown in the towel. Pain is finally winning

it's takin' hold of the saddle. Sit there hopeless, helpless, ignoring the happenings you said

you wouldn't neglect. Hypocrisy and Hell reign fire, while you sit and think about regrets?

Picking at scabs only leads to slower-healing wounds, but you just can't help opening them up,

just FACE THE MUSIC. You got the same old sappy song playing on repeat,

FIND ANOTHER PLAYLIST! Realize there's more to your life than the past

you can't change, it's done already. Let us know when your done with your self-pity party,

while the rest of your life drips away like a leaky faucet. You say the word "loved,"

into your thick, misguided soul. Sadness has had its moment, waking you up

to face the eye of the storm, part of a face that has a name that it won't let you forget

or ever be spoken.

At last, Acceptance has nestled in your mind, quelling your constant crying over wasted time.

After giving everyone else advice, you finally take some. Pushed through and moved past

your black stained palette. Clean slate, carry on, make your next move. They wouldn't want you

to go on not noticing the xanadu that surrounds you. Done falling down the slippery slope,

ready to come to terms, face it head on, aiming to get back to the zenith where you belong.

They're not really gone, just moved to your heart to capture the moments you think they'll miss later on.

Embrace the survivors, comfort your brothers; those arms no longer broken, battered, or bitter.

I think the master piece is ready to be resumed, you just took a break,

life messed up what you had planned to do. Others around the globe are struggling

with what you were fighting, too. Help survivors lean toward the light,

give them a head start to stand and fight!

Show them the light at the end of it all.

Starts out as a speck, but grows, no longer small.