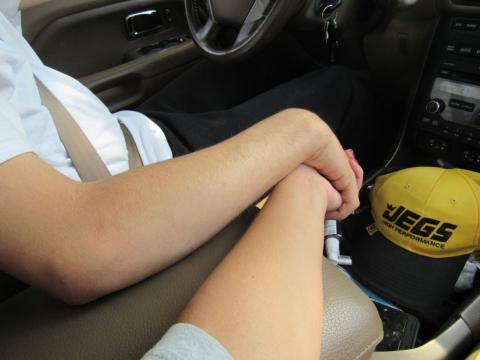 I dreamt of the sun drenched mornings we spent together,

and I thought of the smell of the sea in your wet hair and the glint of sand on your skin as I watched you drive us home,

as an orange sky followed us into the dusk.

I analyzed every image of you in my head, the good and the ugly,

the ones of you with your brazen eyes

piercing my skin over and over,

the ones with your lips pulled back over your teeth and your face twisted in mock disgust,

the ones where your face is slack

and the curve of your eyes shut and the smudge of your lashes against your cheek is a prayer spelled out from Sandman himself.

I agonized over every inflection of your voice over the phone,

remembering the taste of each syllable

as they floated from your lips.

A homily to my healing body.

The drowsy 'tsss' escaping the night I fell asleep on your shoulder under fluorescent light,

you giggling in the picture as I dribbled on you

trying not to wake me.

The nectar sweet 'mhm' cascading down the morning that we went to the art store and I told you that the greatest masterpiece in the 10 mile radius was you.

The humid 'snif' airing out

the night you dropped me home before you went away,

of my brother’s car,

until you disappeared from my eyes.

I spent my affair with another continent tossing the memory

when we laid on your porch swing in your backyard

They were crying because I was crying

crammed in the backseat of my dirty, white minivan and

as soon as your mother appeared in the screen door,

saying it was time to go

And I spent every second in the car

staring out the window

knowing that if you were here you’d fall in love with the lush green mountains of my homeland,

the way I lisped at night with metal in my mouth for correction.

but I was promised to another town, another life, another existence.

as they passed by on my sleepy street.

I dreaded coming home because home was no longer the sound of your voice shyly tracing melodies on the radio in your car.

It was no longer the sound of your breathing after you finished laughing your heart out.

It was no longer the warmth of your hand in mine and the nervous smile you used to give me before you kissed me goodnight.

When I came back on a metal bird all I heard was the silence.

All I saw was the silence.

the birds flood the skies as they returned home.

I watched stray cats circle the streets, marking their land and fending off intruders

making way for their little ones to mature.

I watched myself, a year bolder, hair longer and smile sharper, gain Hope.

After a year of absence,

and a year of wondering if things would ever be the same again,

talk them away and

my uncertainties running rampant after what feels like a century of missing my best friend,

Hope is like the waterfall I let pummel me so I would know what it was like to drown in beauty.

I believed that you could only come home again.

Or maybe, you would become home.

But for now, this is it.

Poetry Slam:
My Year in Poetry Scholarship Slam - CLOSED
This poem is about:
Me
Poetry Terms Demonstrated:
Alliteration