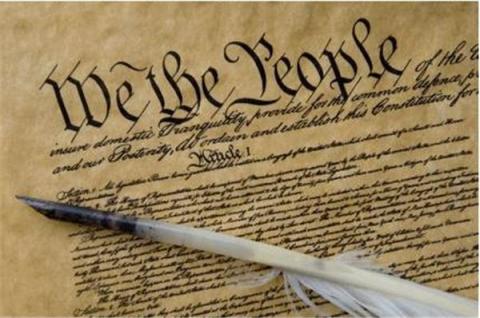 “We the People of the United States,”

But not all of the people

Definitely not gays, lesbians, and bisexuals

Trans people can’t use the bathroom

Actually anyone from a different race isn't quite safe

So when you read “we the people” in the Constitution

You may be directed to

Chapter ‘Sorry’, section ‘Not’, subsection ‘You’

Unless of course you’re white, rich, straight, and male

“in Order to form a more perfect Union,”

The ‘perfect Union’ that we, the government, want

Because we don’t care what the people want

In fact, if you want to vote in the primaries

Or even the general election,

Or divide the sections for the electoral college

Just so we get exactly what we want.

So you may think this is a good system,

But really we’re cheating you

Except we don’t always do it fairly.

Ok, we agree that rapists are bad

But marijuana offenders are definitely worse -

At least in our books

So if you sexually assault someone

A few months is a good punishment

But you smoke some plant,

Man you just stepped out of line and we won’t stand for it!

Because anyone listed here

Gets a way more serious punishment

The good guys with guns

They protect you from the bad guys -

At least who they think are the bad guys

Sometimes they shoot people they think have guns

They were just trying to protect you

… from a threat that didn’t exist…

But it’s ok because we told them to watch out

Specifically for the people mentioned

In that chapter with the section and that one subsection

You know the one

“provide for the common defence,”

We’ll put in a lot of money into this one

To have a great military

Because we’d rather fight people

Than spend money on stupid things

Because fighting others is more important

Than taking care of our own

I guess that means taking care of the people,

Let’s make it impossible for poor people to get it

“and secure the Blessings of Liberty”

(Again consult the specific chapter with the section and the subsection)

“to ourselves and our Posterity,”

Because we care about future generations

We’re definitely NOT going to hate on them at all

Or tell them that they’re lazy,

Don’t amount to anything,

“do ordain and establish this Constitution for the United States of America.”

Whoever is leading this shitshow,

You may know us better as the people

In that chapter with the section and the one subsection,

We know you’re trying your best

And there really are some good things about

The United States of America

But we think that some things need to change

(A LOT of things should change)

Listen to what we have to say

So we’re putting our foot down!

Chapter ‘Sorry’, Section ‘Not’, Subsection ‘You’