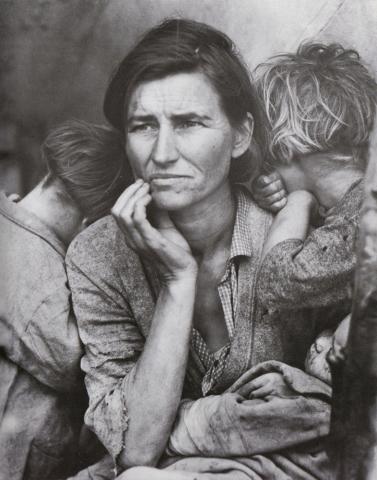 "Run!" Papa yelled and yanked me to the shed.

Mama was ripping her blankets off the bed.

I grabbed Little Ann a rag to protect her pink face.

Louder, louder, and louder my heart would pound.

Until all I could hear was was my blood swirling around.

Papa was spinning faster than the storm.

Trying to keep us all safe from the suffocating swarm:

Of the pebbles, rocks, and God-knows-what-else we saw,

That tried to engulf our shed in its ravenous jaws.

As he covered the windows, sweat dripped from his arms.

I wished to God that those drops had been rain for our farm.

Becca came racing in the nick of time.

Carrying a bucket of water, not yet immersed in grime.

The shed was sealed by blankets and a rag.

Benj stuffed a crack with our tattered American flag.

Mama started to pray and Becca did too.

Papa cussed under his breath, but louder it grew.

When he got too harsh, Benj yelled at him to hush.

I preferred the cussing over the wind that we heard rush.

Louder, louder, and louder it swarmed.

Until all we could hear were the thoughts that we formed.

I started to cry, but Mama closed my mouth.

The dust was seeping in, that cursed wind from the south.

Papa said, "Close your eyes, and cover your nose!"

We clustered together and said prayers that only God would know.

It got much darker, and the wind picked up.

The shed started rattling, like rocks in a tin cup.

We were trapped like animals in a diminutive cage.

After hours of huddling, and trying to survive.

The wind quieted down, and the sun began to revive.

That was the last straw, Papa made up his mind.

We were headed to California, he was tired of this grind.

He needed to get us out of this desolation for a while.

And like the tumbleweed in the wind, headed God knows where.

Papa packed our bags, in search of fresh air.

California was loud, crowded, and full.

But it was better than the suffocating winds of the Dust Bowl.

"Tumbleweeds" they called us, a name meant to be unkind.

But it reminded me of home, so I didn't mind.

It was as if his happy spirit had been split and torn.

He felt like a failure and called himself so.

Mama said he'd find a way, and she began to sew.

She was just trying to help, but it only hurt Papa more.

For him, it looked like smiling was a burdensome chore.

Slowly but surely, he was home less and less.

Until one day I came home to Mama in a mess.

She said it would be alright, but Papa wasn't coming back.

He was in a better place now. But I saw Mama's heart crack.

Why Papa, why did you abandon your wife?

Why did you leave your children without you in their life?

Years have passed now, and we all made it through.

Surprisingly, with no help from you.

Benj has a wife he loves more than the air he breathes.

Little Ann is now a woman, not a helpless young girl.

But she still remembers that day you left her world.

Your sudden death was the hardest for sweet Mama.

But she tried to keep cheerful through all of the trauma.

Her soul was crushed, and her tearful eyes would swell.

Her heart was shattered, for a while she was in hell.

Waking up every day without you is her sorrow.

But every day she wakes, and she'll do it again tomorrow.

There's this grief in my heart, like a knife in my chest.

The faster it beats, the more painful it gets.

Louder, louder, and louder it beats.

Until keeping the knife in becomes an unfeasible feat.

Softly I cry and wishing you were here.

But like a tumbleweed in the wind, you rolled away in fear.

Poetry Slam:
Slam for Suicide Awareness and Prevention
This poem is about:
Our world