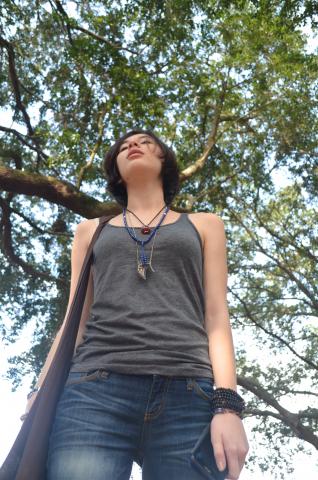 we look for labels to place each other under.

Suddenly they are nothing more and nothing less

than the whore she became in high school,

than the prude she was her freshman year,

than the bitch she became when she broke his heart.

It only took seventeen years for me to finally learn

that you are nothing more than the mistakes you’ve made.

At first they told me I was a prude-

buttoning my shirts all the way up,

never showing an inch of skin

in fear that they’d see the bruises that hid beneath.

because I was waiting for a true man to sweep me off my feet.

I was simply hoping that my heart was worth exchanging for another's,

despite the cracks and missing pieces.

because I had known that they held knives to my spine,

just in case I was to step out of line.

I knew my place,

I knew how they had seen me

as nothing more than a prude.

Then I woke up one day

I finally allowed someone into my heart,

I finally allowed someone to kiss my sweet lips,

because the reality is that it never broke the surface.

And once people saw that I exchanged bruises for hickies,

the word “slut” became engraved on my breast in people's eyes.

I was nothing more than a girl

who gave herself away

I know I am so much more than the whore you may think of me.

and I am not afraid to tell you,

that I am (by definition) human.