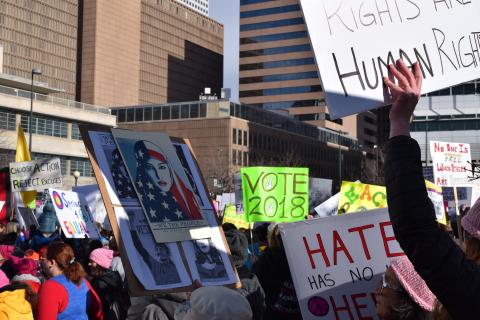 You should be bending down on your knees,

Begging that your babies stop being shot in the streets

Begging that your babies stop being detained at the boarder

Begging that your babies stop being oppressed for their differences

their sexuality, their gender

but my dear, how could you see?

By the dawn’s early light that

your land lays rest to men who believe they can

When you won’t let your most natural bounty grow

What so proudly we hailed as a new start,

gutted clean and locked inside a white picket fence

where a TV loops re-runs of The Andy Griffith Show

And at the twilight’s last gleaming

you doused the sparkle in a Syrian boy’s eye

when you let your guys in green drone bomb his home

It was an accident

for through the perilous fight

your broad stripes and bright stars are gallant,

and gleaming in the blood of fallen bodies

You won’t watch o'er those ramparts though

You built up those walls

To you that flesh, those bones

even though the blood smears their nozzles when they reach the insurgents,

the enemy, the terrorists,

the other human beings split to shreds

The bombs, not only do they burst in that air,

they parade through the minds of believing

who have bought into your lie,

the proof that if our flag is still there,

everything gets your executive stamp of approval

So Lady Liberty, oh say do you see that star spangled banner waving?

Do you feel brave?

Do you know who your land belongs to anymore?