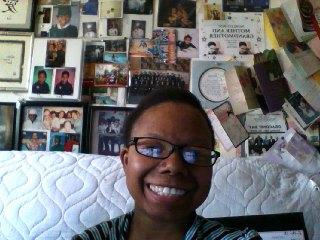 As a four foot nine, last time I checked, girl, you wouldn't think I have a big voice, but when I really try, I have the voice of a thousand stereos on high volume; I didn't use to have a voice at all. Criticism was the bullet that killed my voice. Whenever someone criticised me, negatively, it was like a thousand needles going into my heart and there was nothing to stop the pain. After that, poetry became my voice, it became the one thing that couldn't be killed or taken away because I hid it away for a long time, isolated fromthe world. One day when I was facing criticism, it became too much and I decided to fight back. The critics were shocked, they didn't expect me to say anything, since I'm short and was silent for so long. My size and silence were their power, but my poetry and voice became their weaknesses. With every critic, my voice became more and more powerful, but my voice wasn't only used for the critics and my voice wasn't the only thing that stood out, I stood out, with my voice out there, people were actually getting to know me and not being able to make assumptions about me for just the way I look. I am more than just my height and I am more than just my silence. As I think back, I think of all the accomplishments I have made because I finally let my voice free, I stood up to my critics and I took the stage, claimed the mic, HEAR-ME-ROAR.