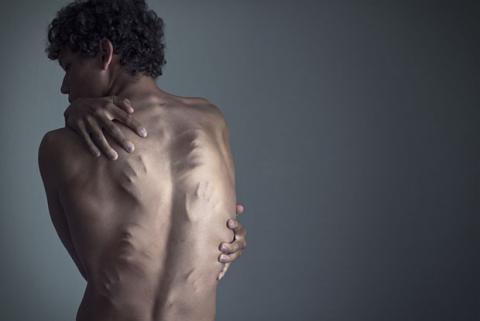 There was an it once, about ye high and ye thin

with a mouth that spewed gospels of joy and tickles.

A hefty charge, it was, to on your shoulders have,

for people of grim and bright sought after his speech.

One day its chest tightened, trachea broke, and

"Suicide!" They're quick to call.

"But he was so happy!" Question, question, doubt, doubt.

Amongst the mumbles words like "trend" and "attention" are thrown around

like worms on a hook, craving to be eaten.

Nobody acknowledges the lies and the deceit

The appearance and pretension

Or the cloak drawn in front of the mirror.

Because when a worm is hooked and thrown into ice

fishers don't stop to think about the plunging stab in its slick abdomen.

So why would anyone care for the clawing creature

making its way through clawing and scratching?

The puke and vomit and waste spewed from his mouth

In society, you're the face.

Society, it's in your face.

No longer are you a you, you're an it.

Something for others to judge and critiqued by hearsay,

And "suicide!" they're quick to call,

too afraid of the reason, of the "it", of the encompassing word: