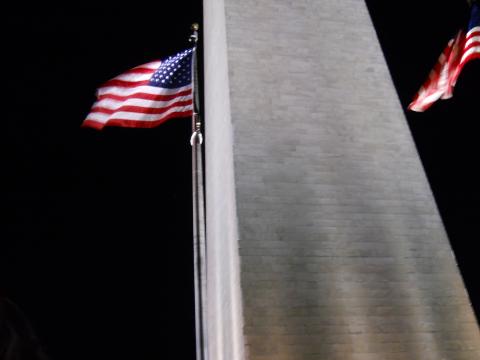 O say can you see, by our country's dimming light,
What so proudly they hailed at the twilight's last gleaming,
Whose broad stripes and bright stars through the perilous fight,
O'er the ramparts they watched, were so gallantly streaming?
And the rockets' red glare, the bombs bursting in air,
Gave proof through the night that our flag was still there;
O say does that star-spangled banner yet wave
O'er the land of the free and the home of the brave?

Yes, it is true! Our flag still does wave!

We still remain in the land of the free,

We are still known as the home of the brave.

She's had her divisions but the she's still united, see?

And thus we hope it forever be, for now freemen do stand
Between their loved homes and the war's desolation.
Blest with vict'ry and peace, may the Heav'n rescued land
Continue to Praise the Power that hath made and preserved us a nation!
Then conquer we must, when our cause it is just,
And this be our motto remain: 'In God is our Trust.'
And the star-spangled banner in triumph still waves
O'er the land of the free and the home of the brave!