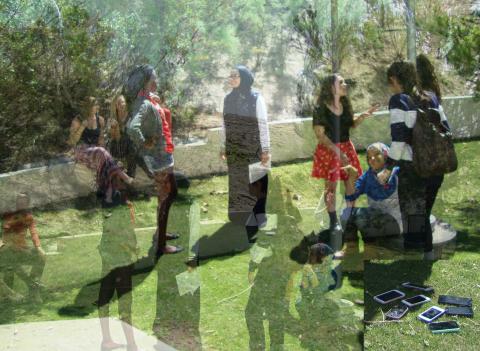 Today we’ve come from lands so far away

From the hills by Dos Lagos

To the Norco trails

From the windows of Eddleman

To the West End Quad

But they keep telling us we’ve seen nothing at all

Everytime we jump on a ship

We think we’ve got it

But wait a moment

And you will see

But not too long ago

I heard this thing…something about being “smart.”

Something about being “keen.”

I was walking along, the IT building

Passing the Corral when I met a man named Rumi

He looked kind of smart

But he didn’t know it yet.

He shared with me his deepest thoughts

And told me to tell my fellow seniors

“Yesterday, I was clever so I wanted to change the world.

Today I am wise, so I am changing myself.”

It’s a thing, this idea.

My other bestie Michael tweeted,

I’m starting with the man in the mirror.

The reflective outlooks don’t stop even if they could

“You must be the change you want to see in the world.”

Remember what I said at the Talent Show?

“You walk in stride,

When it comes to learning, you’re so keen.”

I’m trying to make a difference

Because when people throw away food,

I remember the kids starving in Africa

So I joined Showcase today

To do what I always do

Before we go off

Into this real world they tell scary stories about

Remember where you came from

Timberwolves, without a doubt

You’re bulletproof, nothing to lose.

We’re not going to live for the applause.

We’ll be too busy counting stars.

In college, kids will be distracted.

when they have to stop and take a selfie

You’ll be too busy being announced,

Knowing who’s on your team.

The potential you can reach,

is at the t-t-top of the world.

That’s what the fox told me,

Once he got his head in the game.

Just just hold on hold on,

It’s gonna be the best day of my life.

But not because we’re done here,

But because it’s the start of the something new

And you haven’t done this?

You haven’t smiled for an entire week?

Donated a dollar to a random person on the street?

Fought but for something you love?

Spoke up on your own behalf, instead of letting others talk?

Because I am talking about the world

But you’re just not paying attention

Do something before I shed a tear.

If you don’t do this

Feel the pressure for what I am about to say

To make small changes in the world

Guess you’ll have to compensate

Guess you have to make big changes in the world

We’re too close to perfect

You know in the end, it’s going to work out.

The world is going to know

That JFK let the timberwolves out

And hopefully you listened

Hopefully I triggered a thought

Before you start pointing fingers at another somebody

From the windows of Eddleman

I expect to see your names flashing on TV

And that we unite in some afterlife or heaven or something

And that I hear of all the people you made smile

And that it’s all because you stayed at JFK for a little while.

Because today is the day you’ve really graduated

Today is the day you’re going to be the change in the world you really want to see.

All song reference are property of their respectful owners.

Photography and wording of poem is mine.