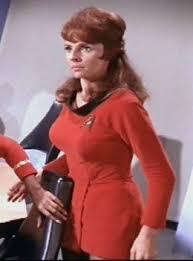 She starred in a Star Trek episode as the girlfriend of Khan.
She was talented but it's sad because now she is gone.
She had Multiple Sclerosis and by 1985, she was bound to a wheelchair.
When she died in December of 2003, it proved that life can be very unfair.

She guest starred in such shows as Hawaii Five-O, Bonanza and Daniel Boone.
When she died at the age of sixty-eight, she died too soon.
Because of her illness, she was unable to reprise her role in Star Trek II.
She was a beautiful and sexy actress and her name was Madlyn Rhue.