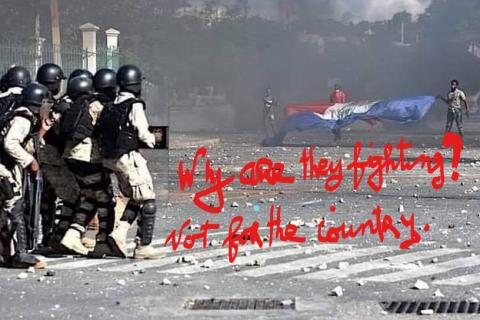 This is not lord darn funny

Since the Fatherland is mad and icky

This is too much, too much! How lurid and vicious!

It's hard to find the exact words

And to recover the lethal swords

Since a man or a woman only dies one time

Not twice, not twelve times, in a deadly crime

Who are the killers, the avengers, the attackers?

Oh! They must be awfully savageous, these predators

In spite of the differences

Sometimes one gets wild chances

The president was not killed

They machine gunned him

Lord darn! It's too much, too much! How rancorous!

They are going to sing the Te Deum Masses

Where are the culprits, the criminals, the wild asses?

All men and women are mortal

The people are immortal

And the country lives under a shy

In front of such a bruised and mutilated cadaver

They eliminated the messenger

But messages are often deafening and sacred

One can't kill a dream with violence and hatred

Yet the sun continues to rise everywhere

Even when it rains somewhere

The firmament remains blue and majestic

When a man dies in such tragic

The assassins must be apprehended as soon as possible

Otherwise, no one will sleep in peace

The president was not killed

Yet he got deafened, executed, rumpled, and disheveled

Amidst all, the country remains somber, powerful and able.

Hébert Logerie is the author of several collections of poems.