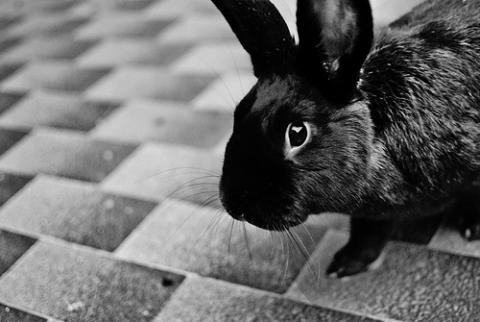 As the rumble of the car abruptly halted, the night’s sounds finally penetrating the massive beast, two small circles of light could be seen, paralyzed by the light’s stare.

The driver, unmoving and unbreathing, was equally paralyzed by the form that seemed to take shape in front of them.

Two gleaming eyes, two pillars of soft fur, a small pink nose that twitched with the desire to run, leading down a toned body to a small tuff of a tail.

The driver opened their door slowly, flinching when the door let out a squeal that dissipated into the night.

The rabbit regarded the driver carefully, turning it’s soft head towards them, as if trying to pick up their scent.

“Hey there,” the driver said, inching their way towards the rabbit, their hands raised in a placating gesture.

The rabbit was not placated.

Instead, it ran into the darkness, fleeing to the safety it would bring.

The driver was disappointed, but smiled.

Just before the driver turned, a small figure dashed in front of them, through the fence, and to the backyard.

Another rabbit, following its mother into the night.