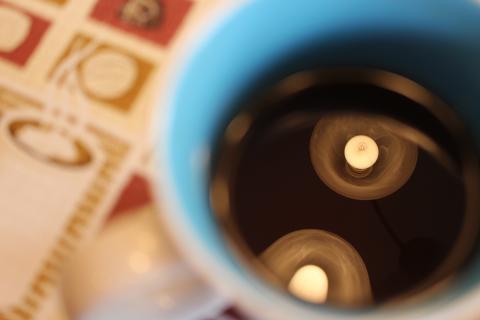 In the dead of a December I was new to town,

With as shy, broken smile and a permanent frown.

With not a thing to do and no place to go,

I found my favorite spot to doze away a day,

The wallflower hangout, the Corner Café.

Leaving a robust aroma in my straggly, auburn hair.

One day over my shoulder I noticed a boy,

He wore a navy sweater over checkered plaid, his casual disguise.

His rosy lips were pursed in a vague but visible smile,

Eyes pale-blue like a chemist’s glistening tube of vile.

Suddenly out of shyness I was forced to turn away,

But something beneath his heavy lashes begged me to stay.

More than any other soul I had ever come to know,

I wondered whom he loved and where he called his home.

One rainy April night while walking home from the local bar,

I saw a familiar crippled shadow in the headlights of an idling car.

In that alley I saw him costumed in a backwards cap and a smile,

Before I could speak he said he was going away for a while.

Even in the wet spring air he smelt burnt and heavy with smoke,

And his now blistered lips seem to quiver as he quietly spoke.

A few weeks later on a humid, sunny June Day,

I saw him hunched in the same corner in the empty café.

His eyes were like sapphire marbles marooned in a sea of blood,

His face looked sunken and rutty like a pearl tarnished in mud.

His once cartoonish, chocolate locks were now heavy in grease,

And down his smooth, fair forehead, there furrowed a crease.

He must have caught me staring because he nudged me to come,

Like a stranger uses money to lure a lowly, lingering bum.

He said he liked the way the black java scalded his lunges,

But preferred eighty-proof whiskey on the tip of his tongue.

Somehow he stole my lips virginity and planted a kiss,

He said it was sweet but came second to self-destructive bliss.

With pride he showed me his arm tattooed in scars,

I must have let a tear slip as he pulled down his sleeve,

Thanked me for the moment but whispered now he must leave.

That day in early summer had folded into the black sheets of night,

And I was left shell-shocked like a soldier who had lost his fight.

He slipped out into the darkness like a soul to the grave,

As I was left like a rusted penny lashed by a salty wave.

Laying in sleepless agony and raging thought, I could still taste the scent,

Of that nicotine, coffee kiss clinging to my mouth like his final lament.

Little did I know that in a dim room across town,

I guess I should have known when several weeks came to pass,

When I never saw him slouched through that perspiring coffee-shop glass.

One morning through the rising steam of a hot cup of tea,

I felt my chest sting and swell like the shrill prick of a bee.

Behind the pages of natural disaster, political quarrels and civil unrest,

There in black and white he stared smiling in a woolen, grey vest.

I wondered why he chose to leave so soon, when for a while he could’ve stayed.

Why he chose refuge with the devil when to the good Lord he could’ve prayed.

What type of restless spirit and broken soul would one have to possess,

To leave Mother Earth while she was clothed in her green, wildflower dress?

Could the wet, mossy smell beneath the cold ground ever truly compare?

To midnight raindrops dancing, or the crisp breath of rustling autumn air?

Damn, I think you’ll miss the sound of snow crunching beneath your feet,

And your lips quenched by Rocky-road ice cream melting in the August heat.

Flower Child I’ll forever wonder if there was one deed I could have done,

To have kept your petals blooming another day beneath the blazing sun.

I know you had to go for reasons I’ll never come to know,

But boy, in my garden-heart I don’t think another love can grow.