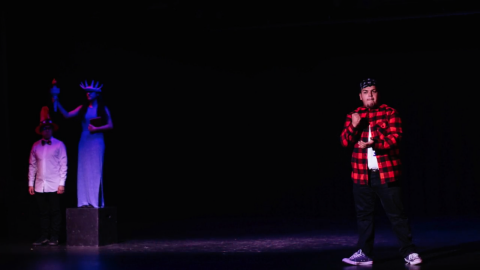 My country, ‘tis of thee

Of thee I sing;

“Where is the equality?”

Land where my culture died

Really? No one?! Alright, I guess I’ll be the one to speak up then.

Brothers and sisters, lend me your ears!

Listen close to what you’re about to hear.

The American dream we fought for has just died.

We’re losing family members here on the West side.

a Racist trump is at the head

Of this Sinking ship

Has a bigoted mentality of “my way or the highway”

which is a pretty common phrase to say

if we’re on issues that are religious-ly, politically, or socioeconomically.

Now, before I keep going, let me

remind our friend up here one little thing.

cause our people here don’t want to hear you rip-

Please come back on stage

We need you in America

You're one of the few things that's good left

That we have here in this country

cause our people here don't want

to hear you rip about the issues of a woman's right.

Well Uncle Sam, glad you asked because you see

Every year they have to fight to drill in the conception

that the choice of abortion

wasn’t about the murder but how it's a contraceptive

but Uncle Sam I know you're not that perceptive

and neither are the rest of you.

And it was pretty evident

that when it came to choose a president

there would be no tolerance

for the opposing stance.

You were either the “racist Trump supporter”

or the “Clinton Commie Tree-hugger”

But all the riots that we saw on TV

from NY to UC Berkeley

we forgot one simple thing

“United we stand, divided we fall”

Did you forget where you come from?

America was founded by immigrants too.

We should be welcoming the newcomers with open arms!

Not building up a wall, kicking them out,

and threatening them with firearms!

Jose Luis is my brother

I am Jesus Bravo!

America? You shut up!

Did you forget where you come from?

America was founded by immigrants too.

We should be welcoming the newcomers with open arms!

Not building up a wall, kicking them out,

and threatening them with firearms!)

We keep preaching that America, the one thing that makes it great is freedom.

"Freedom is what makes it great!"

but we forget that the racism and ignorance is what makes our country hate.

Tell me, Uncle Sam, is it really "Land of the Free"?

Cause I don't think so.

land of the free? more like land riddled in obesity and heart disease.

land of the free? more like land with no equality, have became less scholarly, and rather join a gang to make a few robberies

now, it's land of the afraid, home of the mentally enslaved (and that what really bothered me).

But that’s not all, Ladies and Gentlemen.

We let the color of our skin

decide where we will fit in

and choose what lives to live

but I’m here to say vocally

that I don’t give a damn

that I, a Hispanic man

I choose not to conform to this

and that have kept us personally incarcerated

that’s another problem with our nation!

we make up a quarter of the globes inmates!

And it's pretty sad that we advocate

instead of concentrating on educating

so we can be making a better citizen

instead of drug dealing to the innocent

But hey, as they say

To get that nice, big house

but, all those hustlers

Because I feel the need to scream

that YOUR AMERICAN HOUSE

Should not be built upon

the drugs, the greed, or the human trafficking.

But you know what?

Everyone's gotta hustle in this country

human trafficking, whatever it takes.

we all know at least someone

who is doped up or smoked up on all the crack or cocaina (Translation: Cocaine)

Only to be woken next week

being robbed by some creep.

But as I mentioned, all around, that everybody's gotta hustle hustle

look at all this muscle Uncle Sam got on,

but he's looking into this funhouse mirror.

cause he totally forgot

has made you morbidly obese.

Look at you man!

Ever heard of a gym?

I'd like to end this star-spangled red flag song with another tune:

Oh say, can you see, that

this land was your land,

this land was my land,

but now, it no man's land

our motto was freedom

and the motto has misled them

cause the real saying here is join or die

and agree with me on one thing.

Never tread on me.

This poem is about:
Me
My family
My community
My country
Our world
Guide that inspired this poem:
Write about the social issue that matters to you the most.