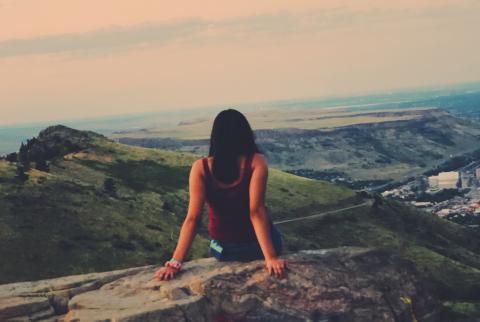 Can I make it to the top without a car?

The top of the mountain looks way too far.

With me, I brought two boulders.

As I continued on my way, I put them over my shoulders.

“Together we will make it to the top,” I thought.

But as I went up, my legs began to rot.

I fall and fall until I am at the point of giving up all.

The boulders were dragging me down.

But it’s my job to get them up there safe and sound.

I became so weak.

I could barely get up and speak.

I will never make it to the top.

I should just give up now and stop.

But then as I was about to turn around

Something in the distance shimmered on the ground.

As I walk towards it, it began to shine bright

As I picked it up I knew things were going to be alright.

I realized what I had to do.

I had to let the boulders go.

It was hard to say goodbye.

As I watched them roll down, I let out a huge sigh.

As I continued, I realized how much lighter I felt

With this new energy, I continued on my route.

As I finally surpassed a lot of obstacles and snow,

I saw the path glistening from below.

The path was so clear, why hadn’t I seen it before?

It was right in front of me, all I had to do was look up from the floor.

I can finally see,

The path that leads to the top.

I will not stop.

The top is in sight.

Finally, I made it.

Letting go of the boulders was the best thing I could’ve done.

Thank you to the shimmer for being my sun.

Being at the top, I knew I was unstoppable.

I finally knew that I was capable,

Of letting go of the past

That I thought was forever going to last.

Up here I am able to see

My inner peace and who I am meant to be.

Poetry Slam:
Desire to Inspire Scholarship Slam — CLOSED
This poem is about:
Me
My family
Poetry Terms Demonstrated:
Epistrophe