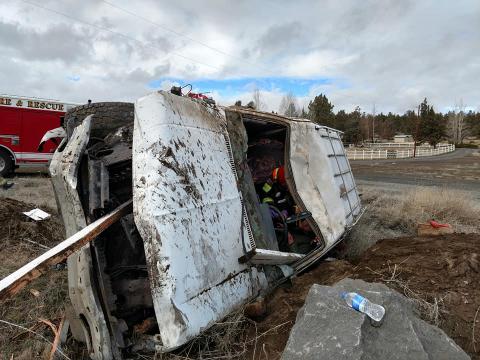 My first memory was driving sixty-seven miles per hour on the freeway, any other day, just going through the ride.

My next memory, my windows were gone, there was a board by my head, car was on its side.

I had had a seizure, unpredictable, weird, I had taken my pills.

But when it comes to miracles, life has had its fills.

I don’t remember a thing, but I probably should be dead from what I was told,

I crossed three lanes of traffic without hitting anyone, anyone hitting me, took down fifty feet of wooden fence, nicked a telephone pole and rolled.

What I had to show was nothing more than cuts on my hands and losing a rig I liked a lot.

But walking away from what I did alive, I shouldn’t complain is what I thought.

A board came through my windshield and went between my door and seat, inches to my left.

There is no way to deny I got thoroughly blessed.

Born five weeks early, thirteen weeks in the hospital, couldn’t breathe on my own.

Now these lungs are sending me three miles in twenty minutes when I get in the zone.

Red gushes out of my mouth as I vomit up blood, am thrown into mom’s car,

And driven like a bat out of hell to the ER.

The back of my throat burst open, doctors dive into me right away,

But two weeks later, the stitches they used gave way.

A repeat of the earlier, another emergency drive

As mother and doctors work against the clock to keep me alive.

Two weeks later, and what should happen for a third time?

The stitches break and out of my mouth comes the red slime.

They used medical glue this go around,

And this time, it kept the blood down.

I’ve had too many close calls to deny

I am in the King of Glory’s all seeing eye.

I hope my life and His miracles in such

May testify to God and His healing touch

It is hard to argue chance alone is why I stand,

For if statistics alone governed the universe, a thousand times over I’d be buried in the sand

No; God has saved me, in this life and the one to come

I will not apologize that you cannot convince me otherwise based on where I am from.