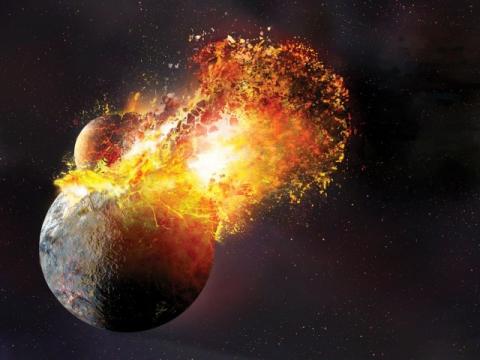 when the sun was still a brilliant youth,

and the galaxy was still finding its feet

among an endless, timeless black canvas,

a planet, moving out of orbit

Nearly. Just near and far enough

that the core of the earth and this alien planet merged,

That the pieces of earth's outer crust would blast off into space,

join together, and become the white, spherical life-bringer of the night.

That this new crust, thin, and fragile,

would begin to move under oceans and over molten rock,

collide, and create this land that we stand on.

This land, these living particles of earth, these remains of my ancestors,

that walked over this hellish, infantile earth

and were caught in this upward battle for survival.

They died, but their mightier sons and daughters were gifted.

that spilled into the atmosphere to create a blue sky.

And we were blessed with lungs to take in this blue sky,

and we were blessed with eyes

to see the foliage wrapping itself over a broken Pangaea,

and we were blessed with legs

to pave paths across countries,

and we were blessed with voices

so that we may sing songs about how we got here,

how women first donned pants instead of skirts

and rejected a life of constant obedience and childbirth

to allow girls like me to dream the same dreams as men,

how slaves rose against their masters,

branded their own art so that

America could see people of all colors as human beings,

how two lovers left the comforts of their home

to bask in the unpredictable promises of this nation

and created me, blood from the East, mind of the West,

I am a seventeen year old miracle walking along five billlion years of history,

who reaps the benefits of a thousand victories,

who came to be from a thousand accidents,

to breath the seconds away, to experience moments of impossibility,

to have a heart that beats the rhythm of life.

Poetry Slam:
I Am... Scholarship Slam - CLOSED
This poem is about:
Me
My family
My country
Our world