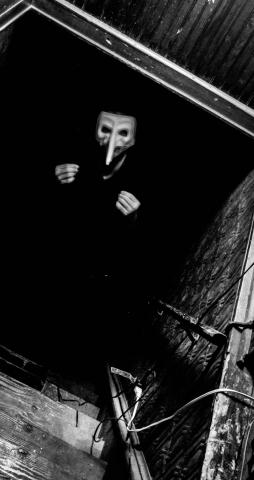 He crept in so slowly,
his beak creaking against the floorboards.
His breathing slightly audible, but still silent.
He ascended quickly to my bedside watching me
and mixing my dreams with his long nails.
He crept into them as quickly as he came
and I remember that night and those memories
that seemed to of existed, but never really.

I knew nothing of it then, but my writing
reflected the gears he turned inside my brain.
those images crept in and crept in and crept in.
My eyes shaking during REM quickly sped up
and I was watching my iris catching fire.
My blood boiling out of my fingers
into small containers some glass others steel.
Little mice slipped in and the floorboards
became snakes that feasted on my draining blood.
I remember it as their tongues slithered across
my fingers and creeping into crevices from which
my blood poured so eagerly.

Waking up afterwards still trapped in Twilight
I saw tiny red dots at the tip of each cuticle
with slight blood dried in even streaks.
The memories still haunt me still.
Somedays I drink them away with others who
will grow old and never know the Man
With the Beak and all his tales.