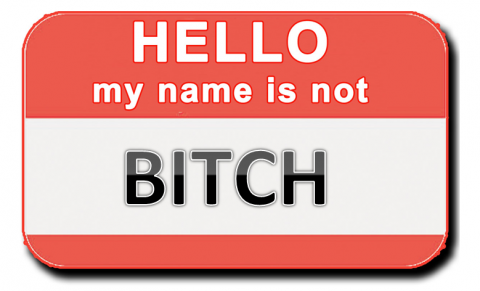 The word is sent out of your lips with the pulling of a trigger: “Bitch.”

Society always said that it didn’t matter, it said that no combination of choice characters from the twenty-six that make up our alphabet could possibly do any damage, but society was wrong about that, more wrong than it ever has been about anything else, and that’s saying a hell of a lot. Because that word, that combination of five letters, of ten pencil strokes, hangs like a cloud of cyanide around my head, choking me, smothering me with every breath I take. That word has burned me like a branding iron; it is scarred into the skin on my thighs where no one can see because I don’t want them to know what the blade that was gripped and controlled by your voice has done to me. I don’t want them to know what you have made me.

It isn’t that I dislike what I have become, but rather that I hate the way I got here, because it was unfair. It was unfair for you to take that word and twist its meaning, to assign it a new definition and expect us to all take it as gospel. Bitch is not my name. Bitch, according to the dictionary, means a female dog, wolf, fox, or otter, and I am none of these things. I am a human being, but it doesn’t matter how many times I say that to you, because I know that I am not and never will be in your eyes.

And I know that you do not see those rings of red marking me out as your next victim by any fault of my own. It is not because I believe a woman should have the right to do what she wants when it comes to her own body even if you call it murder. It is not because I wear crop tops and shorts with a two-inch inseam and flip you off when you call me a slut. It is not because I occasionally ask for he/him pronouns, or because I once went on a movie date with a boy who I was both older and taller than, or because the recipient of all my “goodnight”, “good morning”, and “I love you” texts is now a girl. This is you. It has always been you, and it will never be because of anyone else. You don’t like the face you see when you look in the mirror every morning, and when someone asks you what you have planned after high school, your answer is football practice, and that is why you hate me, and I studied for the test but you didn’t and you regret it now so I get a bad grade, too, but the one I get will actually matter more than a week from now, and do you know what?

I could not care less.

And I say that because it is the grammatically correct way to say it but I’m the only one who cares, because no one knows what’s right and what’s wrong anymore. You call me bitch because of my opinions, because of my beliefs and my thoughts, which were never yours to read in the first place. You don’t seem to comprehend that we are not living in your world anymore, we are living in mine, and it is on the rise. You call me bitch because I am willing to stand up for what I believe in, because I am not afraid to disagree with you, because I know that what I have to say has value, so I’m going to damn well say it, because I don’t kick the nerdy little boy when he’s on the ground, I grab him by the hand and pull him to his feet, because just like him I have been beaten down for your misconceptions and stereotypes about me rather than what I really am, and because I refuse to sit here and take another second of your bullshit, and if that’s what bitch means to you, then go ahead and call me bitch.
Just know it will put a smile on my face, know it will be the biggest compliment you could possibly give me.

Moffat is my spirit animal