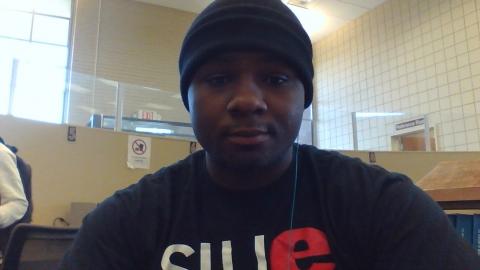 Love is such a simple word

I can never say I knew love

Nor the powers it contained

Just another link in its chain

The powers it obtained

I began to notice that my heart became tamed

But I always denied it

As the thought entered my brain

I couldn't deny the results it made me see

The chemistry between us

The change in the heart beat

Before I was self-centered

Only worrying about the images the mirrors displayed before me

And while what I saw was nice

Beyond God, football and the high school fame

There was a game that I didn't know

One card that I never played.

Then I meet you.

Before I knew it

The connections and feeling hit me

Love had a bullet and it was out to get me

I often reflected the time between us

Just a little too surreal

Then I connected with you on a different level

Past pains began to heal

The times we meet

The atmosphere had a different feel

The more time I spent with you

The more it became real

On Skype that night

I found so much than peace in your eyes

I saw a since of want and happiness

And in your happiness I found happiness

Did you get lost?

I remember the first time I meet you

The f-off stamp on your forehead

How could I forget you?

Who would had known that love would appear

Or the thought of losing someone

You'd be the one I'd fear

I found more than just a lover

I found a friend

Someone that I could talk to

Be myself laugh and connect.

And with our laughs y

One smile that made me smile and feel proud

Cause I knew it was my weirdness

That made it came out.

But when we fell off

There was a pain

I didn't mind losing a lover

But it was going to be hard to lose my friend

The emotions that were tied

The feelings that were shared

The distance and communication conflicted things

But deep down I knew that the love was still there

And you still care

Because the connections we shared didn’t appear out of thin air.

It was being away from each other that made us sick

But patiently I waited

For our love to outweigh that

Even though there was times were I was impatient

I made efforts and pray for this

And because faith without works is dead

That’s the reason I continue to fight though the adversity

And until we connect again.

IL sing the tune of jeopardy

This poem only scratch the surface of things

My mind is a voice and I let my poems sing

I hope when you read this

My phone gets a ring.

Cause I love to hear your voice

Love is a feeling to care and protect someone

This was a feeling I was trying to reject once

And now that I know the power it Endears

To all my lovers

Let’s be a little more sincere.

Poetry Slam:
You Only Write Once Scholarship Slam - CLOSED
Guide that inspired this poem:
Take Your Poetry to the Polls!