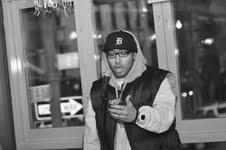 it's a long walk

walking down 161st where his favorite tio lived

he still drinks his pina colada

and a patelito filled with chopped up chicken

he still enjoys the company

though he is been a grandfather repeatedly

but the occasional drink

and the occasional woman

did not affect his medicine

in which made him stronger

that came from home remedy

his gift in his sense of smell is impeccable

he can smell if the person is good

he can smell if the person is bad

he can smell if the person hasn't washed in weeks

he can smell death when it happens to someone

if death is creeping up around the corner

he is blind and despite the fact he cannot see

through the eyes of true seeing in his soul

his vision will not be deceived

even though it is 90 degree hot summer weather

but it is always worth the walk

and he is always mindfully conscious

to bring him a bottle of pina colada

as an offering to his favorite uncle

who continues to live life in all glory

Poetry Slam:
It's All Up to You (CLOSED)
Guide that inspired this poem:
Word Warriors 1: Feedback- The Poetic Kind!

Hello Robert, I am a recent high school graduate, I will be 18 in just a few months.

I saw that you were on the mentoring list and your bio caught my attention. I was just wondering if

you would please mentor me with my writing and give me any advice on my poetry. This is truly my

one and only way of escaping, feeling free. Writing helps me. I'd truly appreciate if you could help

i encourage and support young people to be better writers

its no problem at all to advice and support your poems

lets begin with that process