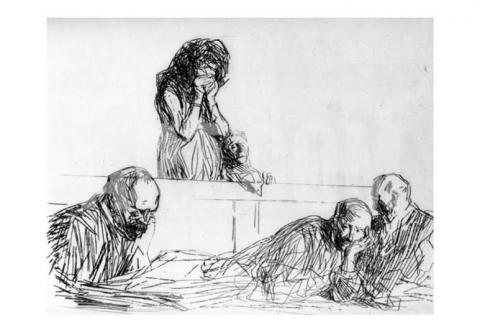 A fetus twisted and kicked inside me
Its tiny, forming body swimming in a sea beneath the amnion
Responding to the horrendous thundering of my heart
As I sat watching a girl I'd known since the day she was born
Cast seething, pervasive stares at the devil,
The holder of her long-lost innocence

From her place on her pedestal,
Body coated in a salty film of sweat,
I could see that her mind was screaming
Her legs were begging her brain to allow them to move,
So she could run, run, run

I prayed to gods, reasoning with Yahweh, Allah,
Making my way back through time
Faster than the speed of light to beg Hera and Zeus and Aphrodite
To lightly settle their hands upon my sister's back,
Sowing seeds into her spine
So that she could sprout wings and fly away from here

My beautiful baby sister would not fly away
Even if the gods had heeded to my begging
She was not vengeful, but there was retribution to be doled out
By the monarch dressed in a robe of black
And a group of twelve disciples in two pews

My sister scraped open all of her scars
In a brightly-lit room full of faces, the fluorescence
Illuminating the dirtied blood that poured out of her
Depicting stories of a devil defiling her again and again
Raping her before she even knew what it meant to be a woman

The devil stared at the black blood

Everything was not okay, years of torment could not be undone
My sister's childhood, her innocence would never be restored
Yet the moment the twelve strangers returned to deliver the devil his fate
I watched him be reduced to a mortal,
A man lesser than scum,
Then lead away in handcuffs,
And I was in awe

Every sight; every smell;
Every beautiful, gracious  angel of justice left lingering in the courtroom;
My sister, not a victim, but a survivor;
Everything, in that moment, was awesome

Poetry Slam:
Everything is Awesome Scholarship Slam - CLOSED
This poem is about:
Me
My family