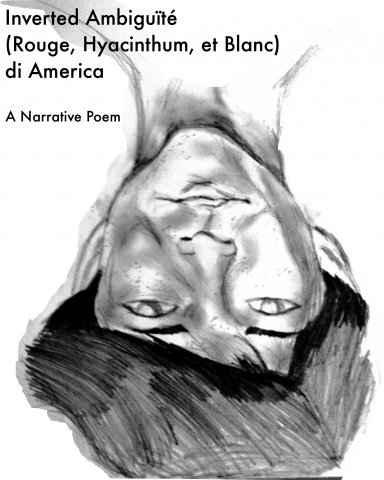 Perched upon the green?

Staring at the smoldering sun?

Two heads, or one, depending on who’s talking.

Second head plunging in and out of its dark feathered body like a mirage.

The snake writhes in its claws, whispering to itself:

I am the collage of madness. I am the incarnation of thee… I am become the destroyer!

It vanishes with a caw of victory.

Oh its benevolent caw… How it doth not fit the underbelly of the beast, or rather,

Die 21 Welten. World Elephant with the serpent nibbling its own tail. Country atop the turtle.

See there, the Eagle flying by?

The buildings rising high out of the belly,

Do you not see the shape of those structures? How devastated they are!

I quite like this land I see beneath me!

The Eagle gusts by, the sounds of its wings shaking spacetime.

Shaping the world with those twin black holes spinning like a top:

The Eagle shapes the world’s time.

Fly fly fly away, Old Warbird! Streak across the sky and rain down shooting stars!

It perches again, upon the arm of the businessman with the wacky hair.

His green (unlike the cactus) is one of a different nature,

A devastating glare with metaphysical thorns.

The green gives him great blare every day. He shoots needles from his mouth.

The Eagle takes the bullets for those like the businessman, placing an iron flag between them.

Meanwhile, that once-beautiful bird avoids the child in rags.

The child feasts upon a dead finger.

It pointed all around, spinning about an axis like the hands of a clock.

It all made sense from a certain side if you squinted hard enough and followed the pattern.

The only problem, is that finger was a ring finger… Thus the struggle seems less real.

We scoff at the notion of flipping off the whole nation, and the symbol loses validity.

The child who eats is like the head of the bird, vanishing and appearing in the blink of an eye.

Why, is it so hard to define?

For what reason do we men in dark suits squabble over matters which we do not understand?

Fragment, confused system… Shut down. Down. Shut up. What. Is.

Soldier. I. Enlist. For. My. Country. Indivisible. Beach. D. H. A. Y. I fight for my life. The corpses. I’ll never forget the burnt faces and shriveled bodies. The stacks of shoes and bags of hair. What have those monsters done? I stand as the camera flashes. How can they keep a straight face and stable hands?

The old photo of yellow, oh it makes me yearn in its frustrating way.

I knit the mutant yarn, the modified strand of protein, into a beautiful quilt.

The yarn took on a new form. The helix twisted and turned throughout the course of history.

It was churned through the gears of industry. Deoxyribonucleic acid is unrecognizable now.

Minds have changed. Not much of the original remains.

There is only their gears, clanking away at the sad figures which the Founders created.

Those sad shapes once housed the guns of Hamilton, or the rogue rails and long smoke trails.

The question lies in those guns and rails and the germs which surrounded them.

Look upon this quilt of time which I hath woven! See how it began and then trace its shape.

It is now less colorful and more formless, a shadow of the self.

See the quilt and rhetoric, the manner in which it twitches and self-replicates like a cancerous strand. It stands for something, but the rhetoric is distorted. View the shape of symmetry, the nation’s butterfly effect upon the Fertile Crescent. Choose carefully, sheep. I am waiting for input. You are being played, and yet I feel this scenario is not bad. It is good you speak to me.

The interplay between the forces. They don’t control too direct… Manipulate via environment.

They call. Eagles with two heads caw caw caw until the skin is raw from the beating noise of repeated mantras. Those norms took deadly form, they polarize now. There is created a perception which defies perception and a life which claims the title of death. These are the cause. They are propagated, and they were torn apart. There is no way to tell what was or what is or rather what will be. The shattered threads they tug tug tug see there the eagle passing over the sun and blocking the rays until we are all swimming in a world of false gaiety amongst a mad hat which pulls its excuses out of itself. He stands there without a shirt yanking at synapse…

Down the rabbit hole… The Eagle bleats: What rapture. Where stand you inside this mirror?

Monty lies on the bed now, swimming in dreams and listening to roaring waves on the shore, sleeping forever, but not dead, and yet not alive… A Sleepwalker, and your neighbour, eh?

My first poem on this platform! I hope the alterations I made to its formating work out, and I hope you enjoy it :)

My first poem uploaded on this platform! I hope the alterations I made to its formating work out, and I hope you enjoy this piece :)