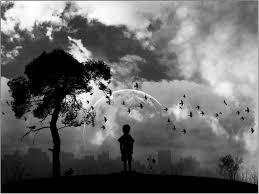 Tender shall all his winters and movements of untamed fire pulse through his veins like a never ending beating of enthusiast heart but damned by his thoughts and punished by the flesh. He breaths in the air he use to know... And chokes on life, every min becomes the final second to what is yet to come. He believes in light but forever wonders in the dark corners of his mind speaking his self into circles saying "nothing has nothing" but these words are his muse to live. he knew he was nothing but a shadow that could lose it all in the morning sun so he runs farther from it all but what could come from nothing if he is nothing. So why is he running from himself if there's nothing. He cries in the night screaming for destiny and looking for faith in all the wrong places. He drives his self insane knowing that he can't stand the thought of what use to be because it haunts him...traces his very on existence and eats him out of his very own soul. All he truly wants is what it used to be; cause this reality is unbearable knowing that his hands no longer belong in hers. Someone else hands rome her body to world ends knowing the thought is his own poison. "Nothing has nothing" is carved in his arms with blood stain rags of mercury he lies in his own warm blood wondering where she is...if she cared...if she knew...if this what she wanted... Is she human or some sick cruel person that lives and feeds on the love of others to survive? Millions of thoughts of hate could not suffocate the feeling of wanting her again. The blood on his carpet was his history of his torments that never ended. As he laid there numb by a broken heart and warmness of his blood, he never knew who he was.
He was the living example of the torment of the human mind. The feelings of being rejected never began to be so hard to take in, he knew nothing last forever but those words slip from his mouth when he had her next to him never knew the true pain be hide those words till now. What control did he have now but empty body no sprite to keep him to stay in one place no life be hide these hands anymore. The only hope would be his own end instead of living in constant torment the sweetness of the ghost that haunts him in his mind. The sense of nothing became more and more apparent when he gives more into his self

Poetry Slam:
Slam What You Will (Closed)
Guide that inspired this poem:
6 Tips for Writing a Poem About Memories