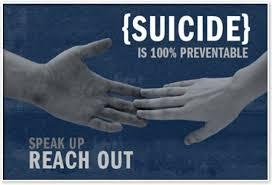 But then, how would that make my parents, my brother, my friends feel?

‘cause I had died.

Would they wish I hadn’t committed suicide-

Or maybe they’d wished they could’ve done something to stop me?

I know they’d be forever sad, they’d forever miss me ‘cause I died.

Sometimes I’m feeling suicidal, even though I know it’s wrong,

I wonder how many people out there know

The number of teens who are either bullied so much-

That they believe there's ONLY ONE way to stop it all...

Commit suicide-A lot of teens think that committing suicide is the only way to stop the bullying-The depression-The abuse-They believe that if they commit suicide,                All of it will go away and disappear- The only probelm is...Nobody thinks about how it'll affect the people who know and care about them.

Yeah, I know what it's like, I've attempted suicide four times

I want you all to know-

No matter what you may think, you're NEVER-NO, NEVER, EVER-You are NOT alone.

There are days when I just wanna curl up into a ball and die,