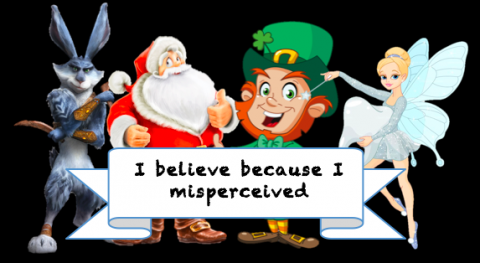 We are told as a teen to believe.

To believe in childhood myths to boost our esteem

That one-day they can release our fatigues in hopes to proceed,

For I did believe that the creature on wings would work with my wiggles while I was asleep,

For I had seen on TV, on the eve, the man who would come down the chimney with deliveries for me to receive,

For I had awakened to the green grass covered in many eggs and became surprised each time on how each was unique,

And for the dwarf who would leave his greed at the end of the debris for many to retrieve,

And yet as a teen I wondered why I was told to believe and from my foes I am able to perceive,

How the winged fairy shows that when things are scary we can look on the contrary with no worry,

How Mr. C who doesn’t prefer tea teaches us the degree of giving and forgiving,

How the hare bares that there is a glare anywhere, in which we must be aware of the hidden treasure,

How the little creature becomes the feature that there is hope at the end of the debris,

Now I believe that I wasn’t deceived because I misperceived.

Poetry Slam:
You, Me, and Poetry Scholarship Slam - CLOSED

you me and Poetry Scholarship Slam