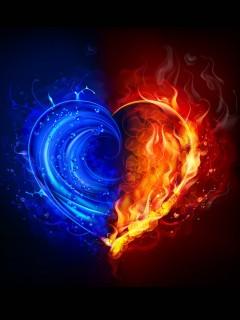 He longingly stared across the room at the girl with the fire red hair.

Her beautiful smile and contagious laugh drew him to her like a moth to flame.

Her deep blue eyes and carefree attitude enchanted him.

The pull he felt towards her couldn't be broken.

She noticed his stare and couldn’t help but to smile to herself.

His easygoing smile and quiet laugh caused her heart to race.

His creativity and kindness entranced her in a way she never knew.

The pull she felt towards him couldn't broken.

His soothing aura and her fiery attitude opposed one another,

But neither saw it as a flaw.

Everyday he would steal a glance and everyday she would hide a smile.

She was fire and he was water but still they desired to be together.

This routine continued day after day.

Their longing growing stronger as they continued to resist.

But resistance can only hold out for so long.

And finally the day came when fire touched water.

It started slow at first but it didn't stay that way for long.

Soon the relationship had reached a passion that few would ever experience.

Though slowly that passion began to take its toll.

They knew how to hurt but they didn’t always know how to heal.

Their relationship was bound by both respect and fear.

Respect for each other but fear of what they could do to each other.

As the days went by a tension began to be felt.

There was no doubt that they loved each other, but sometimes love wasn’t enough.

The months passed with an air of despair growing around them.

They both knew in the back of their minds that something was coming.

The power they held over one another was becoming more apparent.

But for only a moment can fire and water coexist.

And this was the case with them as well.

Their perfect beginning began to dissolve into a dangerous ending.

They knew that they only had a short time left together.

Sooner than they had hoped that moment had come.

The moment that would destroy them both.

Water extinguishes fire and fire dehydrates water, such as what happened to them.

He dulled her carefree attitude and she stole his easygoing smile.

Their touch was poisonous.

So they parted ways more broken than when they began.

And in the end they would hopelessly long for a love they could never have.