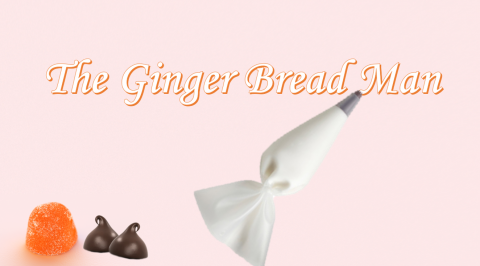 a man many dread.

The Baker was a man of great greed,

Evil, Heartless, with an angry kneed.

Then one day a peasant women arrived at the Baker’s front door,

begging, pleading, she was famished and poor.

The Baker declined the woman all but a dusty gumdrop,

she warned the Baker that his greed must stop.

For if he continued his selfish ways,

he may find himself in an astonishing shape.

The Baker just stood there and laughed in her face.

He told the women, “pay for the food, or go away!”

When the Baker awoke the very next day,

he noticed something was definitely not okay.

For his eyes had turned into two chocolate chips!

Frosting replaced every bit of his lips!

Last but not least, in an even trail of three,

dusty gumdrops made their way down his belly!

His body was brittle, crumbling; he could barely stand,

for he had transformed into a gingerbread man!

The Baker was out all day and night

searching for the peasant women to make things right.

the Baker gave up, angered and crazed.

The Baker shouted out at the top of his lungs

with his voice booming louder than twenty-two drums,

“Change me back right now, I demand!

I cannot stand to be trapped as a gingerbread man!”

“I promise I’ll change, please just give me a chance,

I was a man of greed, I now understand!”

“For money’s just paper and more food can be baked,

depriving you was a selfish mistake.”

Just then, the women appeared before the Baker’s eyes

who in her heart, she no longer despised.

as he promised the peasant food and a home.

The woman nodded without a word

and handed the baker a pocket mirror.

The baker stared in shock, for his eyes were no longer two chocolate chips!

The frosting had vanished, he once again had lips!

Last but not least, the baker could finally breathe,

the dusty gumdrops had disappeared from his belly!

His body was strong, jolly; he could steadily stand,

for he was no longer a gingerbread man!

The Baker was now a man of great pride,

This is very well-written. I love the use of rhyme! The story behind it is very didactic.

Thank you, I really appreciate your feedback!

'once upon a time' poem Story ginger bread man