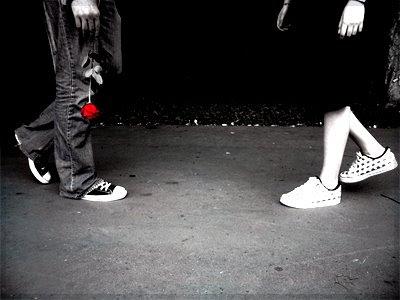 Sitting there under the tree reading 'Black Butler'

Mumbling some of the lines

As if sensing me you look up,

Making that smile as if all you needed is me.

Sitting on the worn out couch you and me play games,

Messing around with each other's controls,

We don't need anyone else.

We're perfectly fine as we are!

Prom hits us and we make plans on what girls to ask out,

We joke around doing pranks on each other,

Laughing I stare around seeing all the other people sprawling about in groups from the courtyard.

I scoffed at them and turn back to see him looking at a girl, making that smile that was only shown to me..

I sit there picking at my worn out gloves glancing up seeing him with that girl,

They're a perfect couple.

Her with her corpse bride prom dress,

Him with his Jack Skelengton style tux,

I glance away forcing a lump down and glance upwards again seeing him smile at her as if she's the sun to his world.

I smiled when he joined me when the dance ended with his hand entwined with hers.

I didn't hear what he said,

Perhapes inside, my heart didn't want to hear the words.

It'll hurt too much.

He seemed so happy.

It's the end of the wedding and we are standing outside from the church,

In our spot not to far looking up at the stars.

I could pretend for a minute that everything is like how it used to be,

When it was just me and him,

Beckering over a certain manga,

Fighting each other while playing games,

But then he turn around to join back with his guests.

Smiling I waved until he turns around,

It wasn't until he was out of site that I let the smile die down,

Turning around looking back at the stars knowing it'll be always like this.

But that doesn't matter to me.

This is really good. :) And I officially love you! XD You like black butler! XD

Thanks! X3 I wasn't sure if I needed some improvment or not, AND WOOOOOOOOOO~ YAS!! *o* HAVE you seen the third season 'Noah's Ark'? :o IT'S AMAZING Apparantly from what my friend, Jona, said it actually followed everything from the manga for that season. >w< Awe~ it's so amazing it brought me to tears almost at the end!