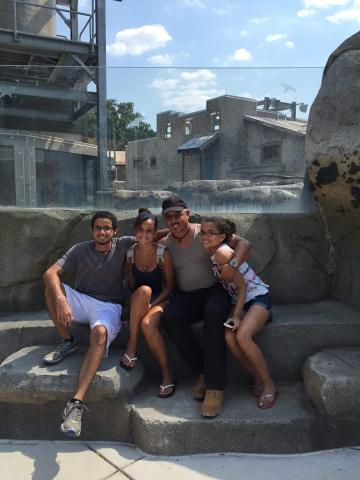 Dad had no where to go,

but to a motel downtown,

costing next to nothing.

He never told his kids where he was staying

because he didn't want his kids to worry.

Our days spent with him were outdoors,

but there was no house to celebrate at,

so we went to the Baltimore Inner Harbor.

We were on the verge of freezing,

but we made the best of it

and watched the fireworks fill the sky

Dad finally got an apartment

He picked us up from my mom's house

My father promised us that from now on,

life will only get better.

We watched from the balcony window

as a heavenly sunset embraced sky every evening.

Dad got a really bad cold

He got irritated more quickly

He didn't want to go outside and explore anymore

He spent most of his days locked in his room

He didn't want his kids to see him like this, in pain

Dad sent us pictures of the sunset from his balcony

Dad didn't pick up the phone.

My older brother found Dad lying on his bed

Life is a rollercoaster..

and this was the trough.

Dad promised me that life will only get better.

and all I could forsee was it worsening.

He had diabetes and nobody knew,

He was a man against medicine

and the help of doctors.

The two things that could've saved his life.

The death of my father,

for many months on end,

filled my body and mind with anger.

Anger towards myself for not noticing the

severity of the situation,

anger towards my family for not helping,

and anger towards my dad for hiding the pain

and not seeking help.

When a loved one is lost,

emotional pain is part of the package.

Especially when that loved one was somebody

who made you feel protected,

made you feel cared for,

and taught you how to see the light in the darkness.

But lessons learned are also part of that package,

lessons that will forever be remembered.

because life does get better overtime.

It all just depends on whether you choose

the lessons learned over the emotional pain.

Poetry Slam:
My Year in Poetry Scholarship Slam - CLOSED
This poem is about:
Me
My family

MY YEAR IN POETRY SCHOLARSHIP SLAM