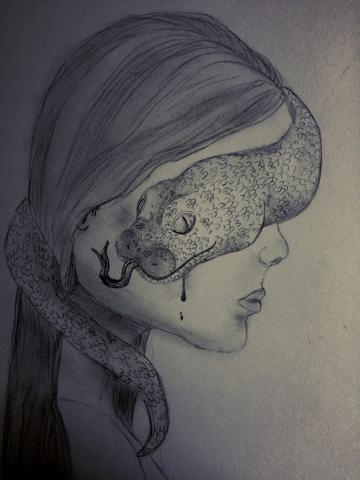 A gaping pit of gossip, lies, and false faces,

Commanding our lives while depositing distrust, and paranoia.

My team, so tight knit, knowing each other so long,

We use limitations to torment victims, making them feel empty.

Girls are the worst; spiteful, and jealous.

About the person we feel the most threatened by.

No one is safe; we are both victim and tormentor.

We put on false smiles, say everyone is friends, no one is hurt.

Snatching at the closest person, trying to pull them down with us,

So we are not the only one suffering in sadness.

Reports are filed in our minds to be brought out, used against our prey.

Curved lips tell whispers that only have a minute amount of truth.

Keen ears strain to catch murmurs not meant to be heard.

We never rest in our pursuit to make others feel as bad as we do inside.

If only we would stop, but gossip is a drug.

An addictive sensation we feel when slanted truths spill out of our mouths,

Into the ears of an eager listener.

Spreads like the plague and infects all those in its reach.

Shielding ourselves from the cruel world, we carve masks.

As we hide behind the pretenses, they glue to our faces, hug our skin.

We can't pull ourselves free. The false faces we show aren't pretty;

Our self-worth gets eaten away when we find anyone with a stronger mask.

I stay up at night and think of what I did, what I said.

I can't convince myself that it was all innocent, that I didn't hurt others.

My actions upset someone, made her life worse.

I promise myself I'll stop to think of the consequences of my words.

The next day, it's a promise I won't be able to keep.