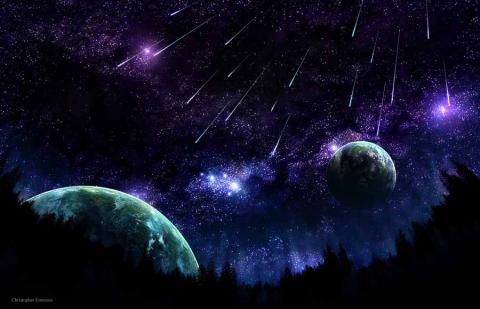 (Inspired By "A Star Is Born" featured on "The Blueprint 3" by Jay-Z.
Written because some Stars were not mentioned)

This one is for the unsung. The unheard.
The one who never got his congratulatory words.

He was doing well from the jump but no one to praise him.
His adoptive parents never gave him any when they raised him.

He got straight A's and was good with new tech
But with no support he just ended up raising the tech.

Damn. He was a good kid too.
But the football jocks never thought he was cool.

So he went with the flow. Got his swag up.
Cursed out the teacher just to get his daps up.

Detentions and suspensions it was no big deal.
He thought it was just the price of keeping it real.

The A's went to B's. The B's went to D's.
Before you know it, hes caught cuttin class to smoke weed.

Now its senior year he gotta move out and graduate.
He gets the word his girl missed her period n shes gaining weight.

College is out the question, his priorities changed.
And nobody’s hiring and he’s looking for change.

So what to do? Gloves are cheap.
Hes out to rob the neighborhood with his father’s stolen piece.

-Crying "If i cant get this money clean Ill get it dirty"!
The cops lock him up a week before his daughters birthday!
And this for the diva who feared default.
She had confidence you could see it in her walk.

Carried beauty from her toes to her lips
Plus she in the top of the honors club and the deans list.

She was into badboys. She was a good girl.
Something about being tempted by the other side of the world.

They aint call her pretty though, they called her a bad bitch
She aint like the word but it was a small glitch.

A small price to pay to assure she looked good
The beauty she couldn't see in herself another man would.

Her mom acts the same since byebye went her dad.
Daughter thinks she’s no good but the boys will say she’s bad.

The problem was when her parents split she took the blame.
Dad never came back, mom looks at her with shame.

She rocks a smile until she’s alone in her room.
The guy from the party is suppose to call soon.

He left a voicemail to say he was in town
Said he could chill if she was around.

He talked real smooth but she aint know him too well
She cracked after a couple texts later and hit him back on his cell.

He said give me a few minutes he came by in his car
He drove to different club because his friend ran the bar.
His friend slid her a drink and Cried "Damn you look nice".
She took a sip, she aint know roofies were in the ice.

This one is for the repeat the “retard”.
The one with ADHD but he's really smart.

Marked as slow because he aint learn from the chalkboard.
Hes a kinestetic learner he does better outdoors.

He even went out and built a birdhouse for the neighbors.
Fixed thier fence for free he liked the hands on labor.

Ms.Jone taught one way and one way only.
His friends passed he was held back, and now hes lonely.

He's not to good at counting molecules in chemistry class
The girls aint like him they mostly point and laugh.

Now he walks the hallways with his head down.
Too sad to talk now he never makes a sound.

All because he never got the academic attention
Or proper instruction to help with his retention.

His only escape was at home with his video games
The one with the pretty princess and the pixalated frames.

She said save me before the monsters get me.
With two bosses down he breezes past level 3.

He saved the girl, but could he save his self?
Loneliness and depression was eating at his health.

He’s been feeling pretty bad. Pretty shaked up.
One night before bed he Cries "I shouldn’t have to wake up".

So he crawls out of bed. He locks his door.
He closes his binds and blasts some hardcore.
Tonight's dinner looks like all the Zanex and Brandy
His eulogy was given by his little sister Brandi...
And this one is for all the fallen stars.
This aint poetry no more, this is me telling you there story because they didn’t get too far.

Some got hurt, some landed in the dirt, others got jailed just looking for work.

Some with a bad childhood, some were in a ignorant system. Every star in the sky is another story, I’m sorry that I missed one.

These stars that never made it out:
They were all prodigies but not enough love was about.

A programmer, An engineer a doctor!

Neglection, bullying and an abandoning father!

A programmer, An engineer a doctor!

Rejection, budget cuts, where was her father?

Some with a bad childhood, some were in an ignorant system. Every star in the sky is another story.... I’m sorry that I missed one.