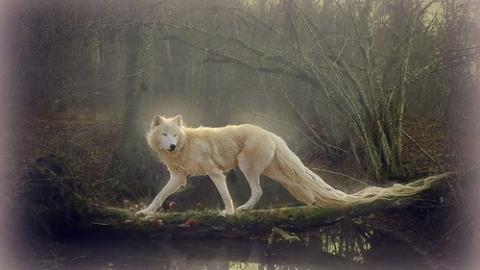 That's not how they always go.

This was the code I grew by,

After all, the world is eat or be eaten.

I was wrong when I was younger,

My priority is chasing meat,

A wolf should never face defeat.

This won the approval of my peers,

However, I always had a nagging thought,

What if one day it appears?

The human that exposes my weak spot.

Little did I know, it would come in a bright red hood.

Famished, I prepared for a hunt,

There was an old lady who lived alone,

She would be easy to confront,

I decided to complete this kill on my own.

But who else would I find in my path,

Than a girl in a bright red hood, who will face my wrath.

I greeted her back.

She was sweet and young,

Could I make her a snack?

She was on her way to her grandmother's house.

I could catch the pair as easily as hunting a mouse.

Mentally, I faced a conflict,

It is time to change?

I just don't want to be treated like a convict,

This new mentality was strange.

But eat her? I don't think I could.

I only seek acceptance,

I want to change my ways,

I am now in repentance,

I will live differently my remaining days,

I have changed my plans,

No more people will suffer in my hands.

To Grandmother's house I was escorted,

An inner revolution was in proximity,

"Here goes nothing", I knock,

And an eloquent one too,

I resisted the urge to rejoice,

As my feelings freely flew,

And Grandmother, though skeptical at first,

Understood that my old ways had reversed.

I kept Grandmother company in return for her care,

Life was no longer an abhorrent affair.

Little Red Riding Hood made my life worth living,

I am indebted to her for her kindness and forgiving.

The agreement from that day,

resulted in me living truly happily since.

Allowing me to evince,

That there is more to life than eat or be eaten.