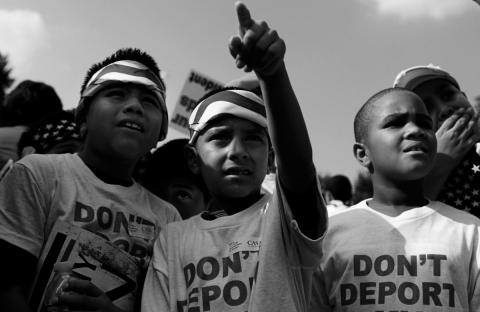 The number of children, according to the 2016 census, that will be kicked out of the self-proclaimed "Land Of the Free".

You try to justify by saying that they're illegal and that if they really wanted to be here, they'd find a way to do it legally.

Legal does not always mean right.

There are veterans killing themselves and others because they can't be provided medicine just because it isn't legal.

3/4 of the indigenous peoples of North America were raped, beaten, pillaged, and then killed.

Because it was legal.

My great-grandfather, who was born and raised in Georgia, had deep tissue scars on his back, arms, and chest.

Because it was legal for him to be pushed against a wall, have an officer take off his belt, and lash him. Left for dead bleeding and crying and it was illegal for him to defend himself.

Just because they had no choice but to come here in order for their family to have a chance at a better life.

You act like this land wasn't theirs to begin with.

Your economy will tank. Doctors will be deported. Families will be torn apart. You will have to look children in the eyes and tell them that they don't matter to you.

Because they are proud latinx and mexicanx, and you are simply pasty white devils trying to push them out so that you can renew the lease on your indigenious graveyard you call a country.