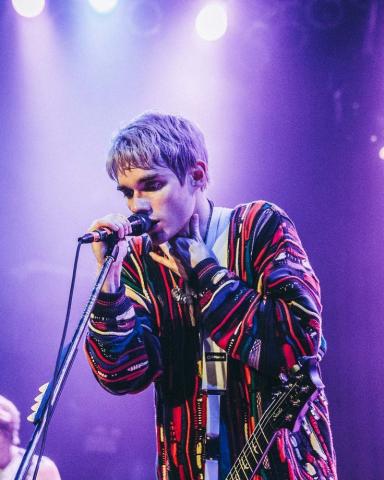 So let me tell you now.

He writes his pain into beautiful melodies

And the way every word falls out of his mouth

Makes you feel as if an angel is singing to you.

He makes the sorrows in life seem alluring

And you can feel the passion drip from his lyrics.

His appearance under the spotlight

Can cause anyone to swoon.

The soft glow that illuminates around his small frame

Transforms him into a lovely sunrise upon the ocean.

The intangible halo that rests upon his tousled

His soft eyes shift to the sea of people before him--

The crowd is shouting out every word to “Lucky People”.

A mellow song that can repair any fragile heart.

Hearing the fans sing along with him caused his

Lips part into a toothy grin, exposing his aggressively perfect teeth in the process,

Leaving everyone feeling intoxicated by his sensational smile.

That’s until a melodic laugh escapes his soft lips.

The sound causing everyone to melt into the palm of his hands;

But the best part is not when he gazes

At the sea of people, it’s when he loses himself in the music

While very vibration from the instruments numb his pounding heart.

The passion coursing through his veins

Is enough to soothe his autonomic mind.

His presence on stage is similar to a fire but

He burns brighter with every song seeping from his soul.

I guess I really said enough and

I was never really prepared.