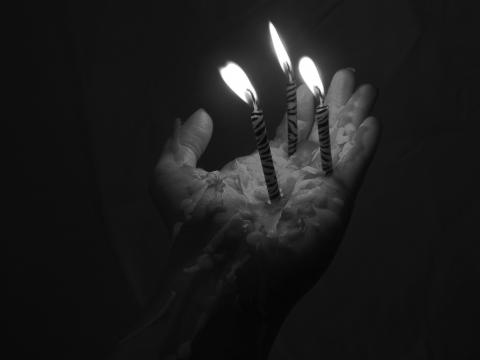 I'm no good with poetry

as it's an art that is felt

I'm not one for feeling.

I'd rather stare at my ceiling

and not feel much at all.

People joke about having dark souls and cold hearts

but why is that?

why describe being sad and depressed as an art?

There are people who die everyday because of it,

but no one cares, not even a tiny bit.

I partially blame society for teaching

What's more real than a grown man fighting a war inside his head?

What's more real than a young girl suffering from rumors being spread?

What's more real than a person wishing everyday that they were dead?

What goes on in the heart and mind,

no one knows, we're all blind.

Most say that they never ask for a way out

but I beg to differ,

Silence can often be the biggest shout.

Some of the worst things are

felt rather than seen.

Poetry Slam:
Slam for Suicide Awareness and Prevention
This poem is about:
Our world
Poetry Terms Demonstrated:
Repetition