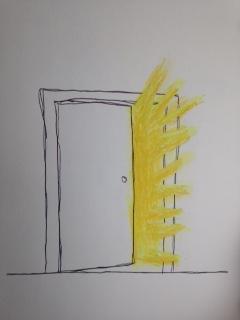 Oh, they say there is a beast,

who lives up the way.

In a house three stories tall,

and soon to crumble any day.

But I've seen whose song haunts the halls,

and I can tell of no beast.

Never would I have gone so close to that house,

had it not been for that voice.

It was the wail of a siren trapped beneath a sinking ship.

called to me. I came to the house upon the hill,

and this is what I saw.

Under the edges of the roof,

doves made homes of twigs and cloth.

There were windows of different varieties,

but only one was boarded up,

On the porch there sat a bench,

The third step creaked under foot,

and that was when the singing stopped.

People say a beast lives within the house.

Its mane, knotted and ragged,

Its skin the color of coal and

great streaks of red raced from spine to limbs,

Often I wonder how this image came to stand,

because when I stood on the porch,

I thought an angel peeked around the open door at me.

Her eyes were like a fire on a frozen winter night.

Her hair was a halo around her head and shoulders,

Her arms were thin and scarred,

but lovely just the same.

Nervous as I was, I stuttered out my name.

"I heard a beautiful song, but how heartbreakingly sad. W-was that you?"

The angel’s eyes narrowed, and her mouth slanted downward.

But as I turned to go, I tripped.

The last thing I remember,

was pain blossoming from my forehead,

At what time I'm not sure,

but I woke to a humming that sounded very familiar.

I lay on a sagging couch,

with different fabrics sewn in all around,

and from my sideways views, I saw the so-called beast.

She was leaning over a pot, her back to me.

That was when I recognized the scars that spanned her shoulders,

for there is only one thing that can cause such torture.

The devil did not reside here,

but within the man who had brought down the whip,

from whatever hell the siren had escaped.

"Truly, I'm so sorry. I thought I'd gotten all the nails hammered down.

Sometimes I think the house has a mind of its own."

It seems she had come into this house

by way of a long-gone friend,

and it was in need of constant care and attention.

We sat at a table, big enough for six,

and though none of the chairs matched,

I asked where she got the set.

"Like most things in this house, I found pieces of it here or there."

but hours passed away. And as the sun fell,

so did my hostess. I noticed it happened slowly.

A twitch of her mouth downward, a shoulder dropping down.

When I asked her about it she sighed,

and I watched her gaze fall too.

"You must be going home soon, don't you think?"

I felt warmth spread from my chest up to my face.

"I wouldn't want to trouble you, but I'm not sure I'm well enough to go"

At that her shoulder lifted,

and her hair seemed to gain more of its volume, as if content with that.

"But your family must miss you-"

"I've no family I'm afraid. If it'll trouble you too much-"

"Of course not, you must stay and rest."

My rest took longer than anticipated,

I'd fallen pretty hard. But every day I stayed,

the siren and I grew closer.

I helped her in her garden and around the house.

We fixed the broken window, and painted the porch.

We often sat and swung, and watched the doves above.

She sang often, and I noticed that less and less

of her words scraped their way out of her mouth;

The house seemed to like me, the angel would say.

It never let her wipe down its windows or sweep its floors,

which was easily done by me.

Every now and then I wonder,

what the people down the hill think.

About the beast and the girl who live up the way,

in a house three stories tall,

and better looking every day.

I'm sure none of them would believe me,

if I were to say,

that a human lives in the house,

and I love her more every day.

Poetry Slam:
Once Upon a Poem Scholarship Slam - CLOSED
This poem is about:
Our world
Poetry Terms Demonstrated:
Metaphor