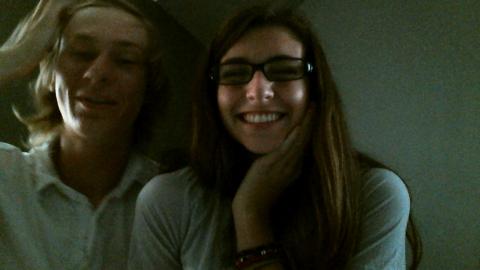 Though her face was young, her mind was mature

She was shy but indeed she could allure

She had the eyes of an owl and wisdom too

And in the gusts of wind, her long hair blew

There is one thing, though, one cannot forget

Always in her hand was a yellow fleurette

A romantic was she in any sense

Love from Mother Nature was most immense

She sang with the birds and danced with the trees

And ate the sweet gifts given by the bees

She read of her kind; but mostly Thoreau

And this pond named Walden where he would go

Down the rabbit hole of free thought was she

Becoming one with her chamomile tea

She questioned life in its very essence

Rarely a trait of the adolescence

She found most of her answers in the sky

As the leaves fell, she sat bundled in wool

Looking thankfully at the glass half full

Her eyes willingly enveloped the scene

And she smelled the cold air, so crisp, so clean

How does one handle such blissful feelings?

Through art is where she would put these dealings

In every direction her paint brush stroke

She painted so much that one day it broke

Though this misfortune did cause her some grief

She just used her hands and then felt relief

A grin crept up as she looked at her hand

Oh the joys that come from the things unplanned

No one had reached this interesting place

She had gotten used to the same blank face

The moving shadows were all they could see

Educated they did not want to be

They look and only see a lost spirit

"Conform! Conform! Well, can she not hear it?"

This made her sad; oh how sore she had felt

So by the old oak tree was where she knelt

The tree told her stories of life and love

And how he was friends with each star above

She decided to tell him of this one dream

And what she had seen by the Willamette stream

It looked like something she read in a book

That's when she was welcomed by a Chinook

They were dancing and singing around a big fire

And climbing trees to see who could get higher

Never had she seen so much joy before

Love was what they had and needed no more

But those of exultance, no need for consoling

Sometimes I do with that one of these days

I would meet this girl that my mind portrays

She would love my trees and paint on their leaves

And uniquely illustrate what she perceives

She'll know my mood as I alternate seasons

And rain may come without any reasons

My wishes for her, like those of a mother:

To be her own person and no one other

For I know she will come; I do not fret

And clasped in her hand, a yellow fleurette