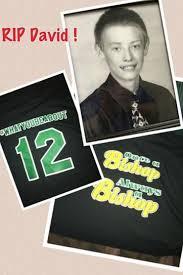 I remember the worst of my evenings. It was a couple days before Easter. I was hanging out with friends and I didn't even expect it. It was supposed to be a good time, another holiday spent with family and friends, but the unexpected happened. His name was David and he was a freshman at my high school. He was fifteen years old, fifteen and he was little and scrawny, but he loved to play basketball. He wasn't as strong as the others boys who played, he had a bad heart. He was having surgery to fix it, but the surgery just broke it more, at least that’s how I would put it. David didn't wake up. He didn’t have Easter that year and he wouldn’t have it any other year either. He was gone. My high school was small, about 100 kids in the whole school. I remember we prayed as a school before we left for Easter break, we prayed for David so his surgery would go smoothly. He was was fifteen and having heart surgery. It doesn't seem right, but sadly it’s becoming more and more common. He was fifteen and that's all he would ever be. I remember getting text after text from my friends telling me what had happened and I couldn't believe it. I went to a catholic high school, had religion class daily, but in that moment I couldn't help but wonder why this had to happen to a fifteen-year-old boy, who always had a smile on his face. It didn't make sense. He was having surgery to fix his heart and you never would've thought the outcome would be this. Then the day of the funeral came a funeral for a fifteen-year-old boy. I saw his mom, I saw her tears and when I saw that my tears started. I couldn't imagine what she was going through, what could I even say that would make a difference for the situation her and her family are facing right now? So I prayed. After all questioning of why and how I turned to pray once more.

When David passed it made me realize that life is just as short as everyone say it is, even if you choose not to believe that. One moment you’re eighteen and it’s your senior year. You want it to end and you just want to graduate and get out. For those still in high school, for those in your senior year right now, do not wish it away. It is true that those are some of those greatest years of your life. For the students at Bishop Donahue High School, live those years for David, because he will never get the ones you’re wishing away so quickly.I take it back when I said David wasn’t strong as the others boys, he was one of the strongest ones.He faced life with courage despite the obstacles he may have faced. Rest in peace, and forever in our hearts.

Guide that inspired this poem:
5 Poems About Loss